What has been the impact of the Covid crisis on local food systems? The example of the “little market” and the Tuesday market at Hauterives 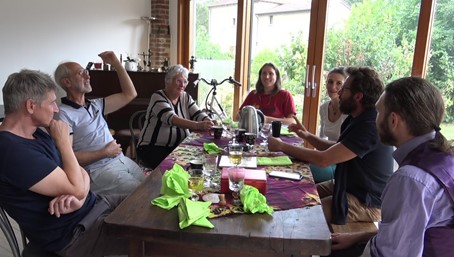 The third hybrid forum (HF) in France took place in Hauterives on Sunday 30 August 2020. The impact that lockdown had on the local food systems was chosen as the main topic of the discussion. Therefore, new people were contacted and invited to join the group. Unfortunately, health rules and social distancing prevented the second stage of the forum to be opened to the public. The forum consisted of a meal taken together followed by the discussion of the panel members in the company of the invited expert.

The invited expert was Dany Lapostolle, an assistant professor from the University of Burgundy Franche Comté specialised in regional planning and sustainable development. He is currently working on a project based on the idea of food democracy in the city of Tournus (Burgundy).

The forum started with a local organic vegetarian lunch (almost all the ingredients coming from the producers of the “little market”) prepared by Laurence Lépine. The audio recording began during this lunch; however,  only the first part of the forum was filmed.  The participants made the most of both lunchtime and the forum to discuss about the themes they had agreed on.

Four major themes structured the debates during this third forum. The first 3  were directly or indirectly linked to the lockdown situation and included: access to quality food for all (especially people in precarious situations), the place and importance of local markets during the period of lockdown, and the role of public authorities in supporting citizen actions. By contrast, the fourth one, which was the most important during the discussion, was in line with the first two forums. It concerned the creation of a place (renovation of a building) on the farm where the “little market” is held and its potential use for associative and citizen activities.